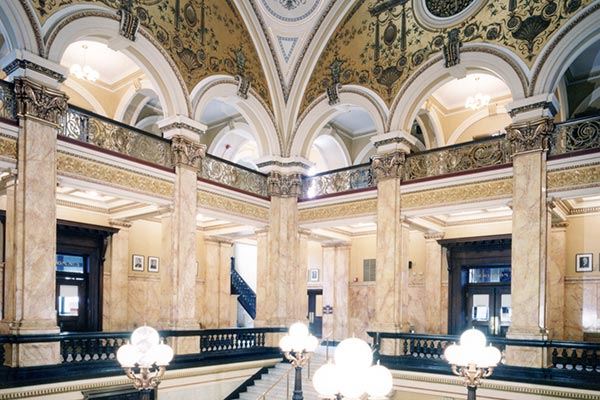 On October 2nd, 1781, in a humble log cabin, Judge Taylor opened the first session of the Washington County Court. Then, as now, its purpose was to keep domestic peace and decide controversies. The county’s first commissioners, George Valladingham, Thomas Crooks, and John McDowell, authorized the construction of a log cabin courthouse. The land for the courthouse was purchased from David Hoge, founder of a town he called Bassett-which the county commissioners would rename Washington, Pennsylvania.

Before long, the people of Washington County had built a two-story log courthouse at the summit of one of the area’s highest hills. Court sessions no long had to be held in private homes, and a town fanned out around this important and symbolic structure. By 1794, Washington County had a new, brick courthouse. The completion of the National Road (Route 40) in 1818 brought the coal industry to Washington County, which quickly thrived.

By 1824, Washington County felt the need to build a bigger and stronger jail. A limestone prison and a fifteen-foot high wall were erected in the public square near the brick courthouse. The county felt prosperous enough to build a third courthouse in 1842. This courthouse cost $25,000 to build and featured a two-story, octagonal cupola capped with a small dome and a wooden statue of George Washington.

This courthouse lasted until the 1890s, when telephones, electricity, and typewriters began to outstrip the efficiency of the 1842 courthouse. In 1897, the Washington County Bar Association and the commissioners organized a competition to select an architect for the courthouse. The winning architect was a Pittsburgher named Frederick J. Osterling, who was greatly influenced by Parisian architecture. The cornerstone of the new courthouse was placed on March 7th, 1899 and the opening ceremony occurred on November 17th, 1900. Although the project cost an extraordinary $1 million, the public became enamored with the grandeur of the courthouse. This courthouse still stands today, for it is truly the "people’s palace."

- Adapted from The People’s Palace by Mary Brignano